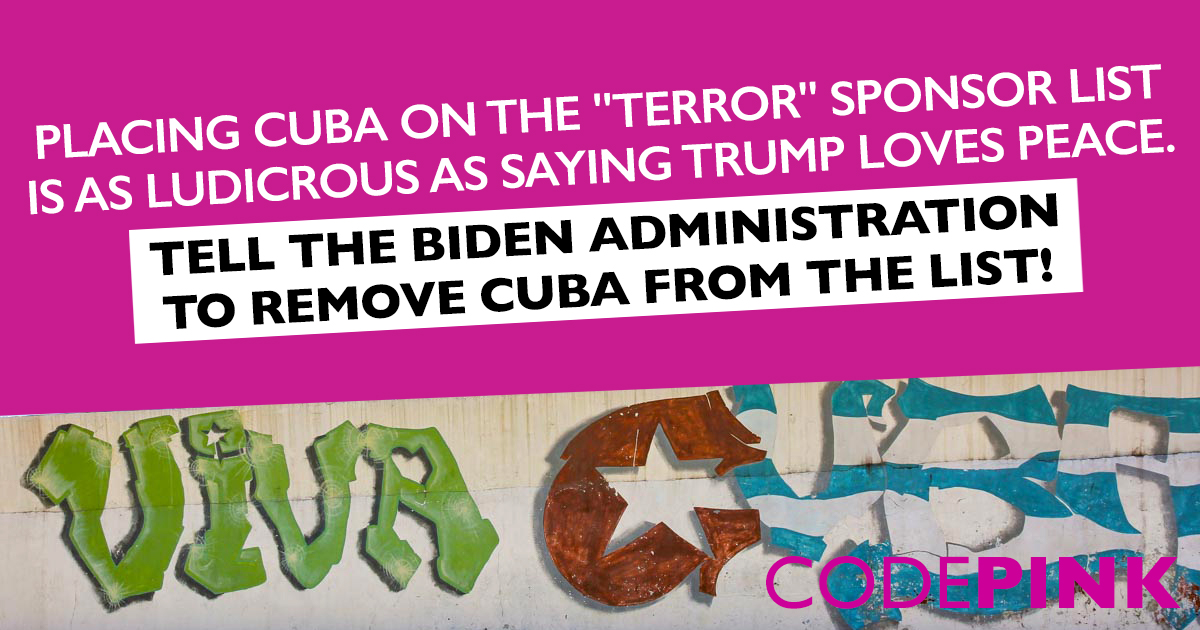 The Trump administration has placed Cuba on the state sponsors of terror list, in a move being criticized as being a “mockery” and “hypocrisy.” Join us in asking President-elect Biden to reverse this ASAP!

The Trump administration’s last minute decision to place Cuba on the list of state sponsors of terror lacks justification and is designed to prevent a reconciliation between the United States and Cuba. Although we know that it can take months to remove Cuba from this list, we hope you will begin this process on day one of your administration.

This decision by Secretary of State Mike Pompeo has already drawn swift condemnation from Congressional leaders. Senator Patrick Leahy called it a “blatantly politicized designation [that] makes a mockery of what had been a credible, objective measure of a foreign government’s active support for terrorism.” House Foreign Affairs Chairman, Representative Gregory Meeks, called the designation “stunning” while noting that President Trump treats “Cuba as a political football with zero regard for the long-suffering Cuban people.”

As you well know, the Obama administration found no grounds to keep Cuba on this list and removed the country in 2015. In the interim period, Cuba has not engaged or supported any act of terror. In fact, Cuba has actively worked for world peace. It has served as a guarantor and host of peace talks between the Colombian government and guerilla movements. Cuban doctors have also been deployed all over the world to fight the Covid-19 pandemic. This sort of behavior should be encouraged by the United States, not punished.

This designation is the last gasp of the Trump administration’s cruel and misguided “maximum pressure” campaign. The global community is counting on you to reverse all of Trump’s decisions regarding Cuba and begin a new process of rapprochement with the nation.

While we must still wait a few more days until your inauguration, we urge you to make a statement announcing your intention to withdraw Cuba from this list as soon as possible.