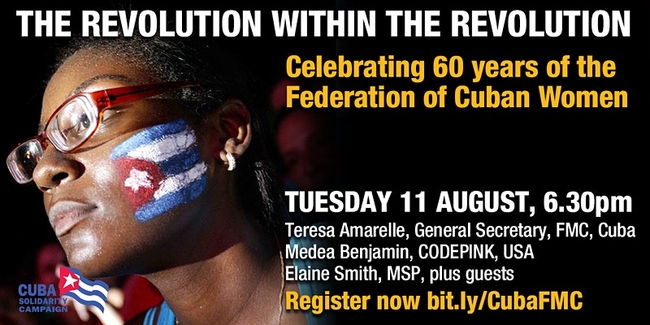 As the Federation of Cuban Women (FMC) celebrates its 60th anniversary, join us live to look back on its major achievements & future challenges on Tuesday 11 August at 6.30pm.

Before the Cuban Revolution women made up 5% of the workforce – today they are almost half. They are the majority of judges, lawyers, scientists, technical, finance, health and public service workers. More than half of Cuba’s international medical volunteers are women, and at 53.2%, the island has the second highest number of women MPs in the world.

At the heart of all of these achievements has been the Federation of Cuban Women (FMC), whether advising government or organising community activists, the organisation has advocated for or organised women since its formation on 23 August 1960.

Teresa Amarelle Boué has been General Secretary, Federation of Cuban Women (FMC) since 2012. She is also a member of the Cuba’s parliament, the National Assembly, representing Las Tunas and was elected a member of the Council of State in 2018.

Elaine Smith MSP has been a Member of the Scottish Parliament for Labour since 1999. She is Convenor of the Cross Party Group on Cuba, and has been Deputy Presiding Officer, Shadow Cabinet Secretary for Eradication of Poverty and Inequality, and is currently Business Manager in charge of the Whips Office.

Julie Walters-Nisbett is Vice-President of Leicester District National Education Union (NEU) and took part in the union’s 2019 delegation to Cuba. She is a joint author of the chapter ‘Black Women in Leadership’ which compares the UK to Cuba in the NEU’s book ‘Beyond the Blockade’.

Miriam Palacios-Callendar is a Cuban science researcher and academic based in London. She is chair of Academic Studies Caribbean Applied Science and Technology (ASCAST) which promotes knowledge sharing between the Caribbean, Britain and Europe.

Please send questions in advance to